GREENHORN IN THE BERING SEA

As a newcomer in fisheries, Sales Manager Brian Jacob wanted a better grip on the industry.

Two years ago, when Brian, former R&D Manager for PALFINGER MARINE Offshore Cranes in Norway, was sitting in front of his computer designing new cranes, he had no idea that one day he would embark onboard a crab fishing boat to experience one of the most enriching episodes of his life. Yet in February 2016, Brian packed his stuff and moved to Seattle on the US Northwest Coast. There he won the position of Sales Manager and became responsible for PALFINGER MARINE’s new expansion into the Pacific Northwest fisheries market. 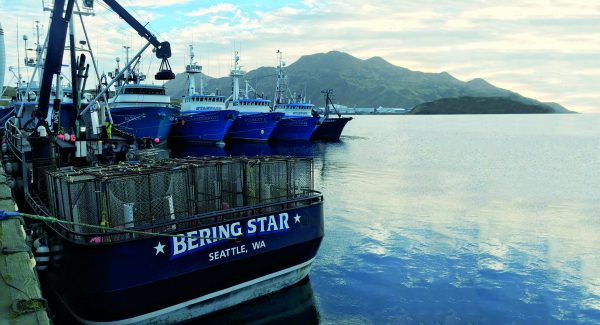 The Bering Star at Dutch Harbor.

When thinking of a Sales Manager, you might picture a strictly serious office guy dressed up in a dark suit, who analyses the market based on  figures and elaborates theoretical concepts. That’s not Brian Jacob. He’s more of a humorous jeans and sneakers kind of guy, with a deep passion for his work and no fear of getting his hands dirty. So, after preparing his move to Seattle from a distance, researching the market comprehensively, elaborating a business plan and hooking up with major industry players via online professional network platforms, his first agenda on US soil was to get out of the office and meet his new customers.

I NEEDED THIS TRIP TO FULLY
UNDERSTAND HOW FISHERMEN WORK
AND HOW AND IN WHICH CONDITIONS
THE CRANES ARE USED.

“As quite a “newbie” in the fishery business, I wanted to get a proper understanding of the market as quickly as possible”, Brian relates.

He started off by participating in different shows and conferences. Then he visited the main Alaskan fishing ports like Dutch Harbor, Kodiak and Homer, discussing deck equipment with the experts themselves – the fishermen. In Seattle, Brian even went onboard a factory trawler visiting the onboard fish processing plant. But all these efforts were not enough for the 28-year-old Frenchman. “I wanted a real taste of what fishermen actually experience at sea and get a feeling of how intensively the cranes are used”, he says.

The opening came with Eric Pedersen, a long-time fisherman and partial owner of the Bering Star, who invited Brian to a 50+ hours Alaskan king crab fishing trip in the Bering Sea. Eric was looking for an experienced company to develop an automatic crab pot handling, stacking and securing system to increase safety and efficiency onboard. In the harsh conditions of the Bering Sea, those deck crew members who take care of stacking and securing the crab pots have a particularly dangerous job. Having a crane performing this risky task automatically would increase safety and also reduce labour costs onboard a crab fishing boat. Brian, who developed, designed and brought to market multiple tailor-made solutions for the marine and offshore industry, seemed to be the perfect match for Eric. And as no big surprise: Brian accepted the invitation right away.

THE BERING SEA WAS LENIENT, HOWEVER…

“I flew to Dutch Harbor in the Aleutian Islands (Alaska) together with Eric and simply landing there took my breath away. The sceneries did not resemble anything I have ever seen before. We met the Bering Star crew as they came back from her first Alaskan king crab trip and my first task was to help them offload the catch. This took almost 18 hours”, Brian explains.

Soon after, greenhorn Brian and the crew of seven departed from Dutch Harbor, heading out to retrieve the 90+ pots left at sea. It took them 20 hours to reach the fishing grounds, about 12 hours to finish the job and another 20 hours to return to Dutch Harbor. 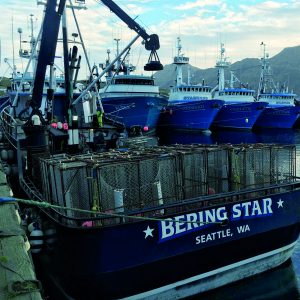 The Bering Star at Dutch Harbor. 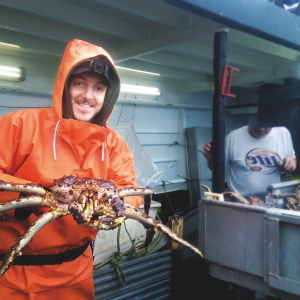 Brian Jacob holding an Alaskan king crab in his hands 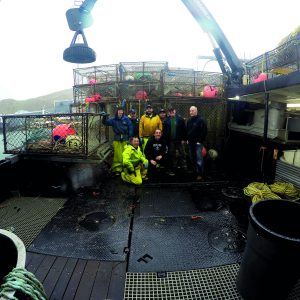 “The sea conditions, with wave heights from two to five metres, were actually quite good. At least, that’s what the crew told me. Although to me it felt very bad.  When we finally arrived at the fishing grounds I only had about 25 minutes of fame on deck until I started to feel really sick. Your body is simply not used to this: you are wearing heavy warm clothes, there are five guys running around deck and you constantly feel like you are in their way, the crane is handling these massive 350 kilo crab pots straight over your head, and as if that was not enough the boat is constantly swinging back and forth, side to side. It’s the perfect recipe to make you sick like never before”, Brian laughs.

The rookie fisherman found refuge in his bunk, which suddenly felt like the safest place on earth. But not for long.“As sick as I was, I still wanted to have a full overview of every single part of the operation, so the captain called me on deck each time the crew performed a new task: from unstacking, baiting, launching, retrieving, sorting and stacking the crab pots”, Brian reveals.

After safely returning to Dutch Harbor, the Sales Manager truly understood the risk fishermen take to bring the finest seafood to our plates. The working conditions are extremely tough and there are plenty of things to be done in order to improve the safety of the crew and the efficiency of the operation. “I needed this trip to fully understand how fishermen work and how and in which conditions the cranes are used. Such real-life experiences allow me to design the best products of tomorrow.”

His new experiences at sea led Brian to work on the development of an automatic crab pot handling and stacking system highly focused on safety, reliability and
efficiency. 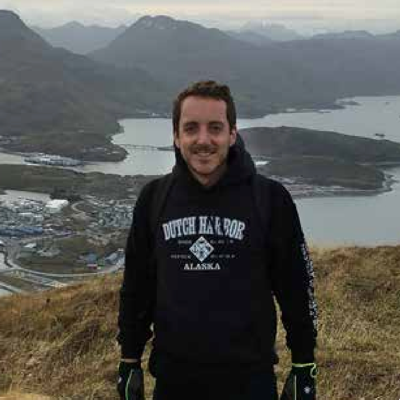