New crane for a crab-fishing star

Marine cranes don’t often star in Discovery Channel shows. But the PKM 250 is no ordinary piece of equipment. Brian Jacob was part of one of our most exciting projects to date.

Brian Jacob is no stranger to crab fishing. In the three years since he moved to Seattle for a new role at PALFINGER MARINE, the Business Development Manager and Mechanical Engineer has become quite the nautical expert in the Pacific Northwest region. And a recent brush with a crab-fishing celebrity will go down as one of the Frenchman’s favourite projects.

Last year, Brian sold a special piece of equipment to Captain Sig Hansen of the crab-fishing vessel Northwestern. If you’ve seen the Discovery Channel’s hit show Deadliest Catch, you’ll know Sig. The hard-charging skipper has been the show’s unlikely star since its launch in 2005. Millions of people now tune in to see him battle the elements with his seafaring brothers. With Brian’s help, Sig selected a PALFINGER MARINE crane, the unparalleled PKM 250, for his beloved Northwestern.

The PKM 250 is a singular piece of equipment that was remodelled for the unique requirements of the Alaskan crab-fishing industry. “PALFINGER MARINE’s technology means that cranes can be smaller, stronger and lighter”, says Sig, who knows just how unstable vessels like his can become when cranes onboard are not proportionally designed. That’s what makes the PKM 250 a perfect choice: thanks to its low weight with a high reach and high capacity, it’s safer and more efficient than any other alternative. Its specialised features include a low-height, crab-pot-handling device and control box to suit the limited space onboard as well as a fibre rope on the winch for easy replacement onboard and access ladder on the knuckle for de-icing the winch – essential in the freezing weather on the Bering Sea.

Sig had selected the best. But before the crane could take pride of place on his darling boat, rigorous tests had to be carried out in Maribor, Slovenia, at one of PALFINGER MARINE’s production and assembly locations for marine cranes. Due to strong currents and deadly waves, new equipment for a crab-fishing vessel needs to withstand the elements. In Sig’s words: “The crane has to fight the ocean. The boat takes big rolls and you’ve got all the weight of the crane and the pots out there.”

The tests were focused, thorough and far from straightforward. Christian Lemmerer, the Sales Engineer overseeing the process, explained: “Due to the special characteristics of the Northwestern, the crane had to be designed for lower-than-usual oil pressure. We then tested the spooling performance of the new fibre rope system and the capacity of the crab-pot-handling unit, an add-on to the standard PKM 250 model.” The team onsite also ran the general PALFINGER MARINE workshop test, which includes the working speed, static and dynamic load tests as well as overload tests. No stone was left unturned. 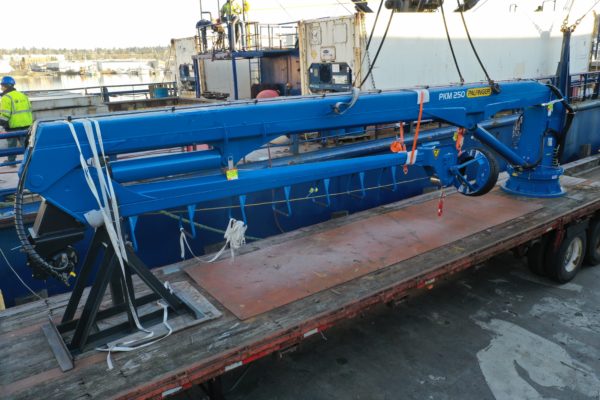 Testing complete, the four-tonne crane was still several thousand miles from Sig’s boat in Dutch Harbor, Alaska. From Maribor, the crane was driven to Hamburg, Germany, by truck, then onto Montreal, Canada, by ship. It was then transported across the continent by train before arriving in Seattle. However, the long journey from Maribor to Seattle was, Brian says, “nothing compared to shipping the crane from Seattle to Dutch Harbor.”

There are only two companies offering fast-transit shipping between Seattle and Dutch Harbor. The selection process was mainly based on shipping schedules as the crane had to make it to Dutch Harbor before Christmas, so the Northwestern could install the crane and start fishing snow crab right around that time. As easy as it is to predict when the ships will leave Seattle, it is a completely different story to know for sure when they will make it to their destination. Storms frequently occur on the way to the Aleutian Chain, forcing ships to stop and seek shelter while the storm passes. The overall logistics of shipping the crane from Seattle to Dutch Harbor ended up being a rather time-sensitive project, but good cooperation between the PALFINGER MARINE team, the shipping company and the Northwestern crew made it all possible. “In the end, it all worked out like a Swiss watch,” said Brian, smiling with relief. 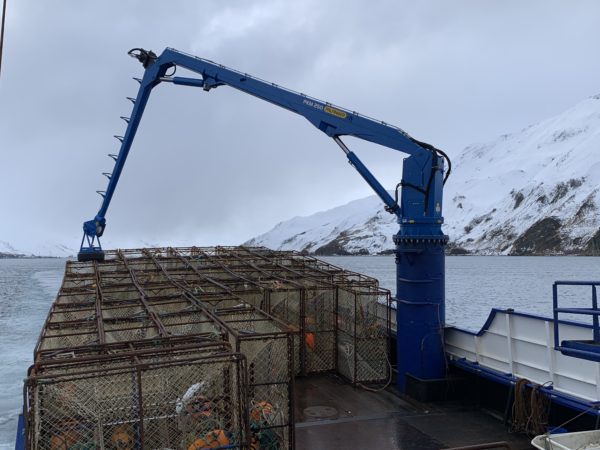 “The old crane was 30 years old and the top part alone weighed 12,000 pounds,” said a relieved Sig Hansen after the PKM 250 had finally been installed. “That’s a lot of weight moving around – the equivalent of 15 crab pots!” After a long wait, the Northwestern sailed into the Bering Sea with its brand new crane for the first time in mid-January. Brian and his team had worked tirelessly towards this very moment.

With a crane 7,000 pounds lighter than its last, the Northwestern is now considerably faster and more efficient. It’s also safer and more stable, even in tough winter conditions. And the charismatic Captain couldn’t be happier: “We’re very proud of it. This is new technology and it’s much stronger. But most of all it’s safer – and that’s all I and my crew care about.”