Do the captain’s and the boat’s names sound familiar?

Captain Sig has been fishing crab in Alaska aboard the F/V Northwestern for more than 30 years. In 2005, Discovery Channel aired the documentary TV series “Deadliest Catch”, which portrays real life aboard fishing vessels in the Bering Sea. Since then, Captain Sig has been one of the most charismatic characters of the globally watched TV show.

This crane order is historic for PALFINGER MARINE: it is the first PALFINGER MARINE crane dedicated to the Alaskan crab fisheries. It also comes two years after our greenhorn Brian Jacob started his new role as Business Development Manager for the North American fishing industry in Seattle, WA. Brian has been working on promoting PALFINGER MARINE products and working out current issues related to cranes with the main industry players. His mechanical engineering background led him to spend time on several fishing boats, analysing the conditions and proposing better, safer, and more reliable cranes to customers. 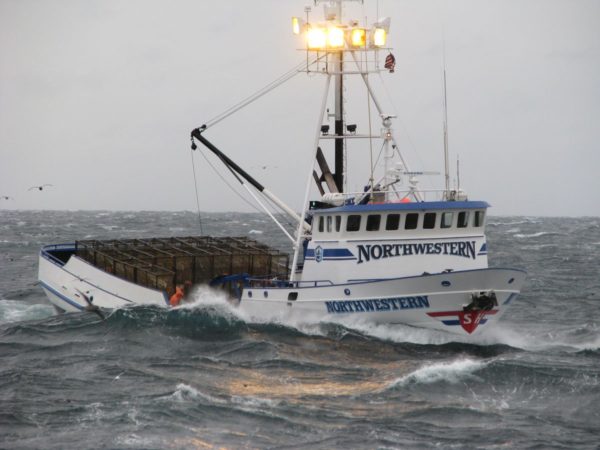 Cranes are extremely important on crab fishing boats. They are used intensively to bring crab pots from the stack to the launcher and back. F/V Northwestern can carry up to 250 pots, which are handled by the crane day and night with very few interruptions. Add to this the fact that the boat fishes in extremely rough seas and you have an idea of how strong and reliable the cranes have to be.

The crane’s super-low weight, its high reach, and the high capacity factor were the main selling arguments for the PALFINGER MARINE PKM 250 knuckle boom crane. Because the US crabbers’ fleet is aging, old boats need to be increasingly efficient to compete with the global economy and new boats that are being built around the world. Since cranes are rather heavy, they can generate a great deal of instability, which in essence is both dangerous and inefficient for the boats. The lighter the crane, the more stable the boat is, which means that the boat is both safer and more efficient. he crew found all they needed in our PKM 250, a standard PALFINGER MARINE knuckle boom crane that has a typical crabber capacity of 4,000 lbs. at 46 ft.

I AM REALLY EXCITED THAT CAPTAIN SIG AND HIS CREW TRUSTED US AS A SUPPLIER FOR F/V NORTHWESTERN. THERE IS SOMETHING MYSTICAL ABOUT THE BOAT AND ITS OWNERS.

It was built by Sig’s father, Sverre Hansen, a Norwegian immigrant who pioneered opilio crab fishing in Alaska. To me, the Northwestern and the Hansen family is just further proof that the American Dream does exist. I am glad PALFINGER MARINE is recognized for its high quality and high-reliability products, and I just can’t wait to see our crane on-board,” says Brian Jacob.

It is expected that the crane will be delivered to Dutch Harbor by the end of 2018. From there, the ship will head for the opilio and bairdi crab seasons.

The F/V Northwestern was built in 1977 at Marco Shipyards in Seattle, WA. She was originally 108 feet in overall length and was built specifically for the King and Tanner crab fisheries of Alaska’s Bering Sea.

To keep up with the increasing demand for crab in the late 1980s and early 1990s, boats needed to carry more pots. Rather than buying a new boat, the Hansen family decided to have the Northwestern extended twice. Originally built at 108 feet (32.9 m) with the ability to carry 156 pots, the Northwestern was extended to 118 feet (36.0 m) in 1987 to allow for 200 pots. In 1991, when the maximum number of crab pots that a boat could carry was increased to 250, the Hansens again had the Northwestern lengthened, this time to 125 feet (38m). Today, the Northwestern continues to fish Red King Crab, Tanner Crab, and Opilio crab. During the summer, the vessel keeps busy tendering salmon and herring. It is one of the most successful boats in the Alaskan crab fishing fleet as it continues to meet its quota and bring in money for the crew and family.

GREENHORN IN THE BERING SEA by Wernerharing 08.02.2018 As a newcomer in fisheries, Sales Manager Brian Jacob wanted a better grip on the industry.
People
FISHING FOR MARKET SHARE by Sophie Grafinger 07.01.2018 The Pacific Northwest fisheries present an enormous potential market for PALFINGER MARINE.
Products