We are a trusted partner for the cable-laying industry.

Today, there are over 420 submarine cable-networks in service, stretching over 1.1 million kilometres around the world. The so-called cable-laying vessels are designed to lay underwater cable lines for telecommunication, electric power transmission, or other purposes. Cable-laying vessels perform a wide range of tasks. These include the installation of cables for offshore wind farms, the installation of fibre optic cables for telecommunication, and cable installations for the oil and gas industry.

NKT Victoria is one of the world’s most advanced and fuel efficient cable-laying vessels. It is equipped with all features necessary to successfully perform even the most advanced installation procedures. Adding this state-of-the-art vessel to its fleet enabled NKT to offer complete cable solutions – from design and manufacturing to installation and service. It combines the best Norwegian ship design and shipbuilding. The 140 metre long and 30 metre wide ship, based on a 306 CLV design by Salt Ship Design, was built at the Kleven shipyard and delivered to NKT in April 2017. Right after, NKT Victoria headed to Scotland for its first job, during which it was used to lay 113 kilometres of submarine cable from Caithness to Moray. Currently, it is busy installing the export cable that will connect the 600 MW Krieger’s Flak offshore wind farm to the Danish national grid.

Equipped with a high-end dynamic positioning system (DP3) to automatically maintain the vessel‘s position and heading, it lays high-voltage offshore cables with utmost precision. The two turntable carousels (one on deck and one below deck) have a combined capacity of 9,000 tons of cable. Generally speaking, the higher the cable capacity of a vessel, the more cost-efficient it is for the customer. Compared to other cable-laying vessels available on the market, NKT Victoria consumes less fuel and CO2 thanks to a power-from-shore solution in combination with onboard energy storage systems. The power-from-shore connection can be maintained while loading the cable onto the vessel – a unique advantage which results in a more environmental-friendly operation.

For cable-layer NKT Victoria, the winner of the prestigious “Ship of the Year Award 2017”, PALFINGER MARINE supplied a complete winch package, consisting of a sixpoint mooring system, anchor and mooring winches, and cable-laying winches. The complete winch package is based on state-of-the-art electrical, frequency controlled drives. With a total equipment weight of approximately 258 tons, it is certainly not an exaggeration to speak of a major delivery.

ALL OUR EQUIPMENT WAS TAILOR-MADE IN CLOSE COLLABORATION WITH THE DESIGN COMPANY SALT SHIP DESIGN, KLEVEN SHIPYARD, AND THE OWNER NKT.

We started working on the project in March 2015, six months later we were officially given the contract, and another 14 months later we delivered all the equipment on time”, says Sverre Mowinckel-Nilsen, Sales Director – Winches and Handling Equipment.

Our six-point mooring system, with four winches below and two winches on deck, is designed to maintain the stability of the vessel during operation. Having a six-point mooring system reduces the need to use a positioning system and, as a consequence, saves fuel costs. Each winch has a pulling capacity of 60 tons at first layer and a holding capacity of 90 tons at first layer and can store 900 metres of Ø 40 millimetre steel wire. 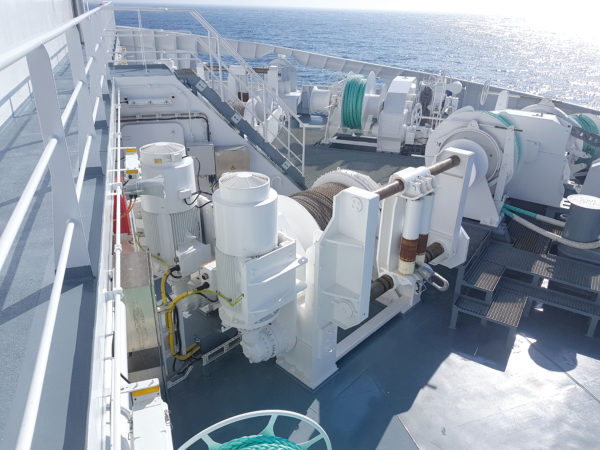 Abandon and recovery (A&R) winches are designed to automatically maintain a constant tension on the cable during cable-laying operations. Each winch of the three winches delivered to NKT Victoria has a pulling capacity of 45 tons at top layer and a drum capacity of 800 metres for Ø 46 millimetre steel wire ropes. They can be operated both locally and remotely.

In addition, PALFINGER MARINE supplied three initiation winches and three tugger winches with a pulling capacity of 6.4 tons at first layer. All six winches are equipped with a spooling device for controlled spooling and have a drum capacity of 160 metres of Ø 19 millimetre steel wire. During the project we were also contracted to deliver an overboarding roller guide for use during cable-laying operations. 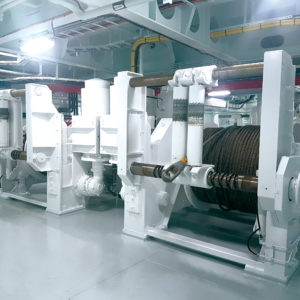 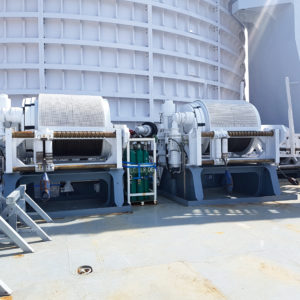 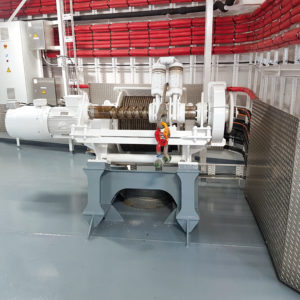 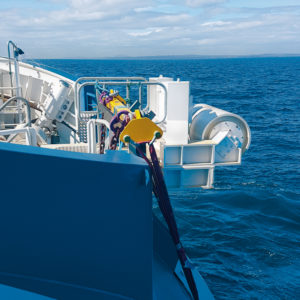 BUT THAT’S NOT ALL… 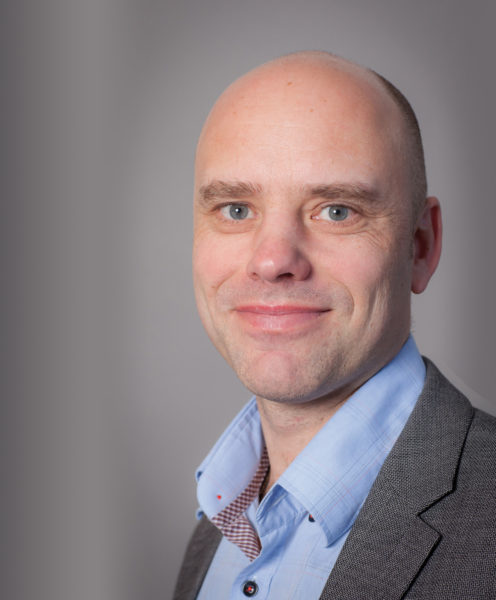 ANOTHER CABLE-LAYER CONTRACT by Sophie Grafinger 06.02.2018 Large equipment package to a cable-laying vessel under construction for Kokusai Cable Ship Co. Ltd (KCS) in Japan.
Products
OUR ALL-NEW ELECTRIC DAVIT by Sophie Grafinger 23.08.2018 We are proudly presenting an electric davit based on a completely new technology.
Products