Perfectly equipped with lifting solutions from PALFINGER, a new and very special vessel sets sails to unravel the mysteries of the deep blue sea.

For most of us, the “final frontier” is space. We have Gene Roddenberry’s Star Trek to thank for that. The TV series’ iconic title sequence tells us how Captain Kirk and his crew “boldly go where no man has gone before”. There is, however, another great unknown a little closer to home. We humans have entered space, landed on the moon, and even started exploring Mars, yet we still know very little about what lies below the oceans that cover more than 70 percent of our own planet. 80 percent of our oceanic world remains unmapped. Perfectly equipped with lifting solutions from PALFINGER, a new and very special vessel sets sails to unravel the mysteries of the deep blue sea.

OceanXplorer: a futuristic marvel at sea

The OceanX team of researchers, scientists, and filmmakers has developed this new scientific research, media production, and exploration ship: the OceanXplorer. This futuristic marvel is not only a floating marine research platform, but also a media production studio of which Hollywood would be proud. Given that famous filmmaker James Cameron acted as a consultant during the development phase, the latter should not come as a surprise. The vessel, a former petroleum support and survey ship retrofitted at Damen Shiprepair in the Netherlands, is set to fulfil OceanX’s vision of making ocean exploration as thrilling and exciting for audiences as space expeditions by producing footage for documentaries on a global scale. 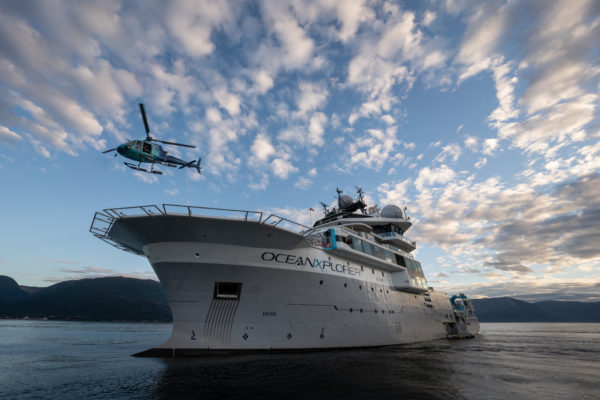 © OceanX / Taj Howe: PALFINGER was selected as one of the major deck equipment suppliers for the world’s most advanced research vessel, OceanXplorer.

A ground-breaking vessel like the OceanXplorer is, of course, exclusively equipped with highly functional deck equipment solutions – which is also where PALFINGER came into play – and state-of-the-art technology on all levels. It features advanced, media-optimized scientific exploration vehicles, as well as chemical, biological, and geophysical sampling tools. The ship’s two Triton manned submersibles, Nadir and Neptune, are of particular importance alongside Argus, a camera-equipped remotely operated vehicle (ROV), and Remus, an autonomous underwater vehicle (AUV). It therefore goes without saying that OceanX was not willing to compromise in terms of handling these vital research assets.

PALFINGER’s most advanced A-frame ever installed

Sverre Mowinckel-Nilsen, Sales Director of PALFINGER’s marine handling solutions, recalls when OceanX first reached out regarding a launch and recovery system for their on-board submersibles with a diving depth of more than 1,000 meters: “They knew what they wanted. They just needed a supplier capable of making the impossible possible.” And PALFINGER delivered. A few years later, the OceanXplorer boasts the most advanced A-frame knuckle boom ever installed onboard a scientific research vessel. “The unconventional design allows the boom to reach further into the deck area for service and maintenance,” Sverre reveals. The A-frame with a safe working load (SWL) of 40T, 20T in personnel lift mode, features a wide range of tailor-made safety features and can be operated from the comfort of a control cabin. 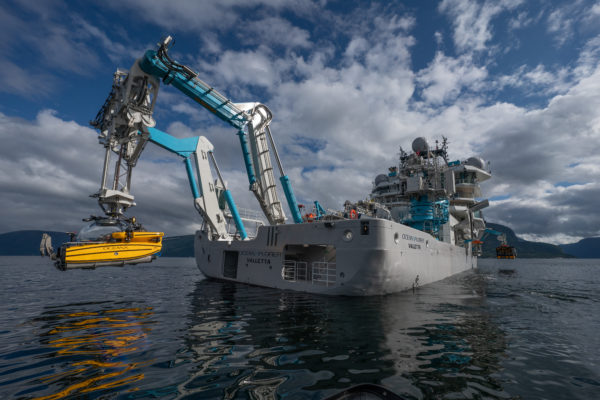 Speaking of safety, PALFINGER also provided a 10T towing winch capable of towing Nadir and Neptune during recovery operations and a 10T Active Heave Compensated (AHC) recovery winch that can operate in water depths up to 1,500 meters (4,920 feet). “The winch is fully capable of recovering the submersibles in cases of emergency,” Sverre explains. The additional 30T knuckle boom offshore crane, a DKF800 model with a 15T SWL in personnel mode, can also be used for launch and recovery operations if required. “With a reach of 21.5 meters, we have supplied a crane fulfilling all needs for onboard and quay side cargo handling,” Sverre adds. 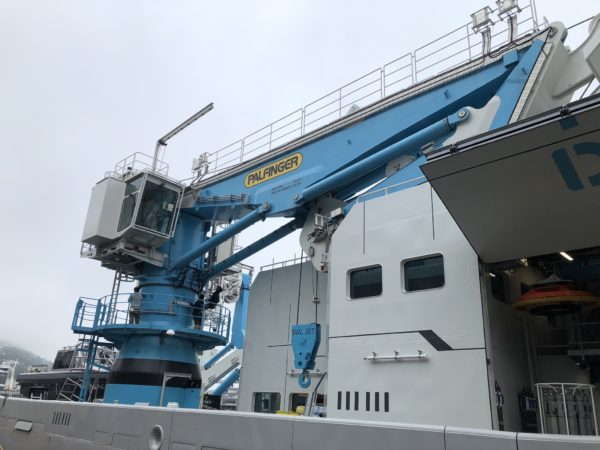 The R/V OceanXplorer successfully tested its equipment in the fjords of Norway before embarking on its maiden voyage to the Red Sea to study super corals that appear capable of resisting global warming. The OceanX team is convinced that their new vessel will be instrumental in exploring and sharing the unknown underwater world. OceanX has already found new species, captured the first-ever footage of the elusive giant squid in deep-water environment, and explored the Antarctic ocean at a depth of 1,000 meters. That was, however, only the beginning, as OceanX founder and Creative Director Mark Dalio explains: “OceanXplorer will allow us to pair science and media together like never before and share the excitement and wonder of ocean exploration with a global audience in real-time.” We at PALFINGER, for one, cannot wait. Bon voyage!