2020 was a difficult year for the offshore oil and gas industry, but the recovery is on its way. Brazil is likely to play a major role in this upswing.

2020 was a difficult year for the offshore oil and gas industry, but the recovery is on its way. Brazil is likely to play a major role in this upswing, not least due to its recent oil and gas discoveries in pre-salt offshore fields that are best accessed via FPSO (floating production storage and offloading) vessels. PALFINGER is perfectly placed to benefit from this development as a trusted supplier of on-deck and safety equipment for these crafts. We caught up with Guilherme Felix, Regional Director at the PALFINGER Marine Latin America office in Rio, to find out more.

Guilherme is excited about recent developments in Brazil, and it’s easy to see why.

The demand for FPSOs is increasing significantly as a direct result of recent oil and gas discoveries on Brazil’s pre-salt fields.

“This is good news for PALFINGER, as we have made a name for ourselves as a reliable supplier of offshore cranes and LSA equipment for most of the FPSOs that have headed out to Brazilian exploration fields recently,” Guilherme explains. Excellent news indeed, but what exactly is an FPSO? Let’s start with a short history lesson… 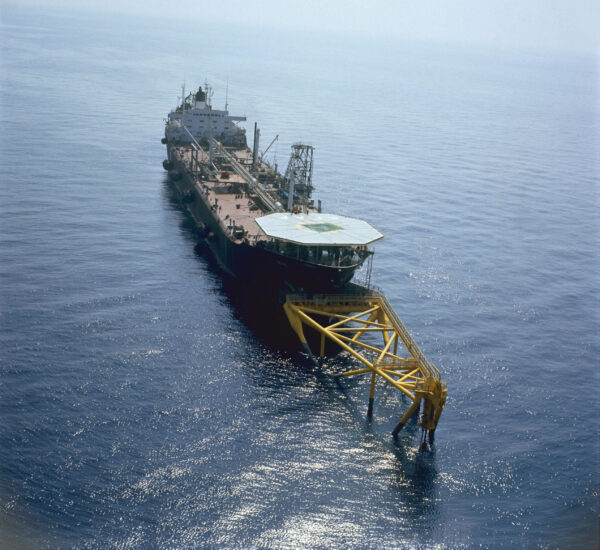 As the name suggests, an FPSO is a vessel that can produce, store, and offload oil and gas while floating out at sea. The very first of these multitasking experts was developed by Shell in 1977. The converted oil tanker was deployed to Shell’s Castellon oil field in the Spanish Mediterranean. Before the arrival of FPSOs, companies were limited to extracting oil and gas from shallow fields with a water depth of no more than 50 meters. Today, the vessels tap into fields at depths between 1,800 and 3,000 meters. Given that transporting oil and gas to shore in subsea pipelines is economically unviable from a certain depth onwards and when fields are far out at sea, FPSOs not only made harnessing these sources possible – it also made the process vastly more efficient. Today, more than 270 oil FPSOs are out at sea worldwide. 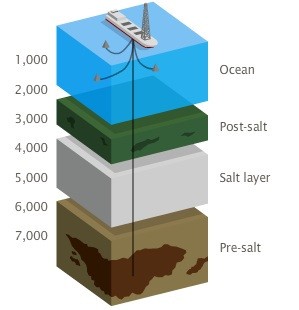 You might have noticed Guilherme using the term “pre-salt” earlier. This term is important to understand why FPSOs are so essential to Brazil’s oil and gas industry. The pre-salt layer is a series of geological formations characterized by thick beds of evaporites, mostly salt. These formations are particularly common off the coast of Africa and Brazil. Some of the oil and gas generated within this segment has not migrated upward. In fact, the reserves contained in this layer are considered to be a significant percentage of the world’s resources. The salt bed that encloses the oil and gas is approximately 2,000 meters thick. This layer itself can be covered by more than 2,000 meters of sediments at water depths between 2,000 and 3,000 meters.

The pre-salt discoveries in Brazil over the last decade are among the most important in the quest to meet global demand for high-quality oil and gas. After all, the output per well in Brazil’s Santos Basin is much higher than the industry’s average. The most productive field in operation, Tupi, generates a daily flow of 36,000 barrels of oil per day. The field with the greatest potential, however, is Mero. Here, oil columns could be up to 400 meters thick. One of the more recent discoveries in the region was announced by Brazilian oil and gas group Petrobras in December last year. Tests carried out at an almost unimaginable depth of 5,540 meters confirmed the presence of an oil reservoir of excellent quality in its Búzios well. This is where FPSOs come into their own.

“Pre-Salt SA, a company responsible for managing the pre-salt exploration contracts, expects up to 28 FPSOs to enter operation between 2021 and 2030. Despite the tough COVID situation, this demand is a direct result of recent discoveries on the pre-salt fields in Brazil and the opening of the exploration market over the last few years. The continuous upswing in newly sanctioned FPSO projects indicates a bright future for the market in general,” Guilherme explains. The need for so many FPSOs becomes clear when looking at the rise of oil volume extracted from pre-salt fields. The numbers are quite staggering. “The daily production of oil extracted from pre-salt has risen from an average of approximately 41,000 barrels per day in 2010 to approximately 1,900,000 barrels per day in March 2020,” Guilherme points out. 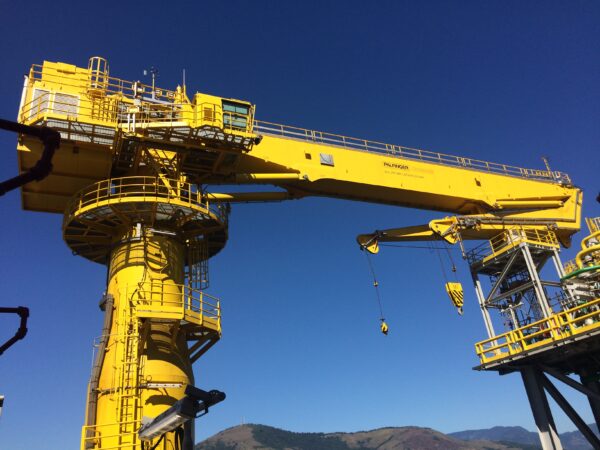 PALFINGER offshore crane installed on deck of an FPSO

As Guilherme pointed out earlier, PALFINGER supplies offshore cranes and LSA to FPSOs – but there’s more to it. “PALFINGER also offers local technical support throughout the entire lifespan of an FPSO. This is quite a commitment, as such a vessel can operate on a production field for up to 30 years,” he explains. So, how many FPSO projects has PALFINGER contributed to lately? Guilherme points out: “Since 2017, when we delivered our offshore cranes and LSA packages to the FPSO operating on Modec MV-29, PALFINGER has consolidated its position as one of the world’s leading technology suppliers for these types of units, securing equipment supply contracts for more than five other units scheduled to start operations within the next couple of years.”

One of these commitments involves the delivery of two electro-hydraulic stiff boom cranes for the Anna Nery FPSO that will be deployed to the Marlim 2 oilfield in Brazil’s Campos Basin. In addition, PALFINGER has been asked to equip the converted tanker with a rescue boat, four lifeboats, and accompanying davits, as well as with a fender package. The production is scheduled for 2022 and 2023.

Finally, we wanted to hear Guilherme’s take on the development of the Brazilian oil and gas market in general. As someone who has been part of the industry since 2007, it would be a waste not to ask for his opinion. “Historically speaking, the oil and gas business has always had its ups and downs. It is all about monitoring those trends closely and never taking your eyes off the road ahead,” Guilherme says. “The oil and gas market was showing signs of economic recovery in 2018 and 2019, but then the coronavirus pandemic happened. Brazil, however, remains a strong market with many excellent oil and gas prospects to be further explored. I firmly believe the future looks bright.”

PALFINGER is proud to be able to contribute to this bright future with high-quality equipment and services. We know our customers in Brazil, and Latin America in general, are in excellent hands.