When it came to expeditions, Fridtjof Wedel-Jarlsberg Nansen (October 1861 – May 1930) didn’t deal in half-measures. Neither did he in 1893, when he set off for an unforgettable adventure. Together with his companions, he traveled towards the north pole on his ship Fram. Day by day for three years, the Norwegian explorer had navigated through uncharted territory and encountered treacherous routes while fighting against the freezing cold. In the end, he may not have reached the earth’s northernmost point, but he did reach a record northern latitude. Thereby, Nansen achieved international fame. And his name shall never be forgotten … 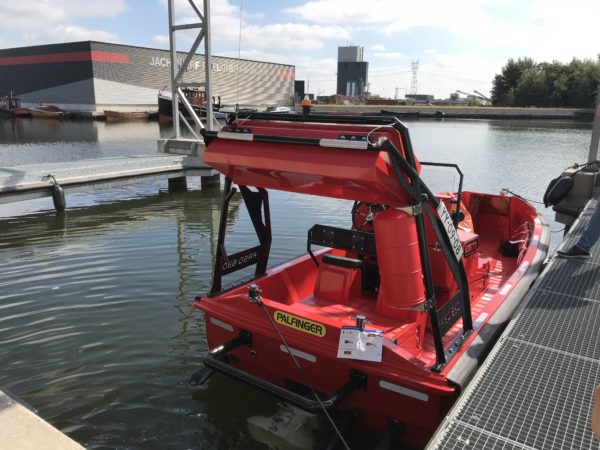 The scope of delivery for MS Fridtjof Nansen includes, amongst others, two PALFINGER fast rescue boats.

Hurtigruten may be shaped by tradition but has never lagged in technological progress. On the contrary: The cruise line has evolved with the rapidly increasing requirements of maritime traffic. Like her famous namesake Fridtjof Nansen, the new ferry is a pioneer in modern cruising, using environmentally friendly state-of-the-art ship technology. By utilizing electric propulsion, the cruise ship cuts fuel consumption and CO2-emissions by 20 percent. Periods of silent cruising are also made possible by the vessel’s hybrid technology.

It is not unusual to be confronted by cold temperatures and harsh sea conditions at destinations like Norway, Antarctica, Greenland and Iceland. For this reason, Nansen was built in compliance with the Polar Code.

MS Fridtjof Nansen was our second Polar Code cruise project. It came with an invaluable learning experience that we will definitely draw on for future projects.

Adjusting the equipment to Polar Code standards, Project Manager Anne Berit had to focus on some crucial details: “In order to stand up to cold temperatures, our davits as well as boats were delivered with special heating. Furthermore, we provided protection covers for the lifeboat release hooks, winches as well as rescue boats to defy these extraordinary conditions. Finally, inside the life- and tender boats, we installed porta potti, or, in other words, toilets.”

These extras came hand in hand with quite a few challenges. Nonetheless, PALFINGER’s LSA-team mastered those skillfully: “Due to all the extra heating, we needed big transformers. We had to find a way to deal with the heat inside the control cabinets. Eventually, we counteracted this issue with fans inside the starter panels”, Anne Berit explains.

“The biggest challenge was to find space for the heater and porta potti without having to remove seats. But in the end, we found a proper solution”, she says contently. “Still, since our products are very individual, we are aware that for every new lifeboat type, we will need to start from scratch when it comes to finding space for the heater and the exhaust outlet and air inlet”, Anne Berit asserts, “however, as challenging as our job might be, nothing can take the exhilarating feeling away from you when you’ve found the optimal solution”.

Hurtigruten and PALFINGER: a partnership with history

Robin and Anne Berit accompanied the latest Hurtigruten project since 2015. Another one of their latest projects was MS Roald Amundsen, Nansen’s sister ship. PALFINGER’s partnership with Hurtigruten nevertheless goes back much further.

Hurtigruten and PALFINGER share a long history together. Our partnership goes back to the early nineties, when we first delivered lifesaving packages to the cruise line. Ever since then, we’ve supplied each one of Hurtigruten’s vessels with equipment.

“Working with Hurtigruten is more than a good reference for us. It is an honor to be part of a sustainable project initiated by a cruise line with such a remarkable historical background”, Robin adds.

From mail boat to expedition fleet

It all started in 1893, when Captain Richard With accepted the challenge to establish a regular sea route for mail boats along the Norwegian coast line. The initial route led from Trondheim to Hammerfest. Later it was expanded, enabling seafarers to go from Bergen to Kirkenes in only seven days. Hence, With named this connection ‘hurtigruten’ (translated from Norwegian to English: ‘the fast route’), setting the foundations for the cruise line’s popular explorer operations. Today, Hurtigruten’s expedition fleet sails to the world’s most exquisite places and least visited shores.