Erlend Bøyum is on the team behind the delivery of Lifesaving Equipment for the Johan Sverdrup project.

Imagine strapping yourself into a lifeboat with 69 colleagues and free falling into the North Sea from a height of 29 metres. That’s what workers on the Johan Sverdrup oil rig need to train and prepare for in case an emergency strikes. PALFINGER MARINE won the contract to deliver nine FF1200 systems including one movable top unit, which will be mounted onto the platform’s living quarters.

JUST MILLIMETRES OF ROOM FOR ERROR

Erlend Bøyum is the Senior Project Manager for the job. “In the past we had only delivered up to four systems in one structure. The Johan Sverdrup project required nine,” he says. “The physical dimensions presented a real challenge, as the structure has a total length of around 55 metres and a tolerance of less than one centimetre. However, we knew we had the skills and experience to manage the job successfully.” The system’s incredible size isn’t the only thing special about the equipment delivered to the Johan Sverdrup site: “The lifeboats are a standard model according to our frame agreement with Statoil, but they are the first to be delivered with Lifeboat Navigation Assistant, including Automatic Escape System.” This special technology includes a servo steering unit and an autopilot that is activated during free-fall and guides the lifeboat away from the platform in an emergency situation.

HOW TO TEST A FREEFALL LIFEBOAT

According to regulations all lifeboats need to be free-fall tested before being taken into service. Needless to say, testing this equipment was an extensive process. “To minimise the amount of offshore testing we drop tested all lifeboats at our location in Seimsfoss, Norway: once from 29 metres and then nine times from 33 metres,” Erlend says. Lasting five days, visitors came from K2JV and Statoil – the client and end customer respectively – as well as DNVGL and Sintef Ocean, who documented g-forces and other important measurements. But they weren’t the only special guests.

TESTING THE LIFEBOATS IS REALLY SPECTACULAR TO SEE, SO WE HAD KIDS FROM SEVERAL OF THE LOCAL SCHOOLS AND KINDERGARTENS COMING TO WATCH TOO.

FROM PROJECT SIGNING TILL DELIVERY

Erlend’s colleague Oddgeir Mælen, Sales Manager in the Product Division Lifesaving Equipment, was responsible for the project from the early stages in 2013 until the contract was signed. The Johan Sverdrup project is a big one: “We had to win this prodigious project in strong competition and a tough market. That’s something we’re really proud of”. The project was then handed over to Erlend. Production ran from early 2016 to mid-2017, with the davits delivered in September 2017 and the lifeboats being stored at our location in Ølve until delivery in May 2018. Erlend’s involvement in the Johan Sverdrup delivery isn’t wrapping up just yet though: “Installation and testing on the platform will continue throughout next summer and we still have weekly meetings with the customer,” he says, “but we are delighted to have finished the equipment on time and to their satisfaction.” 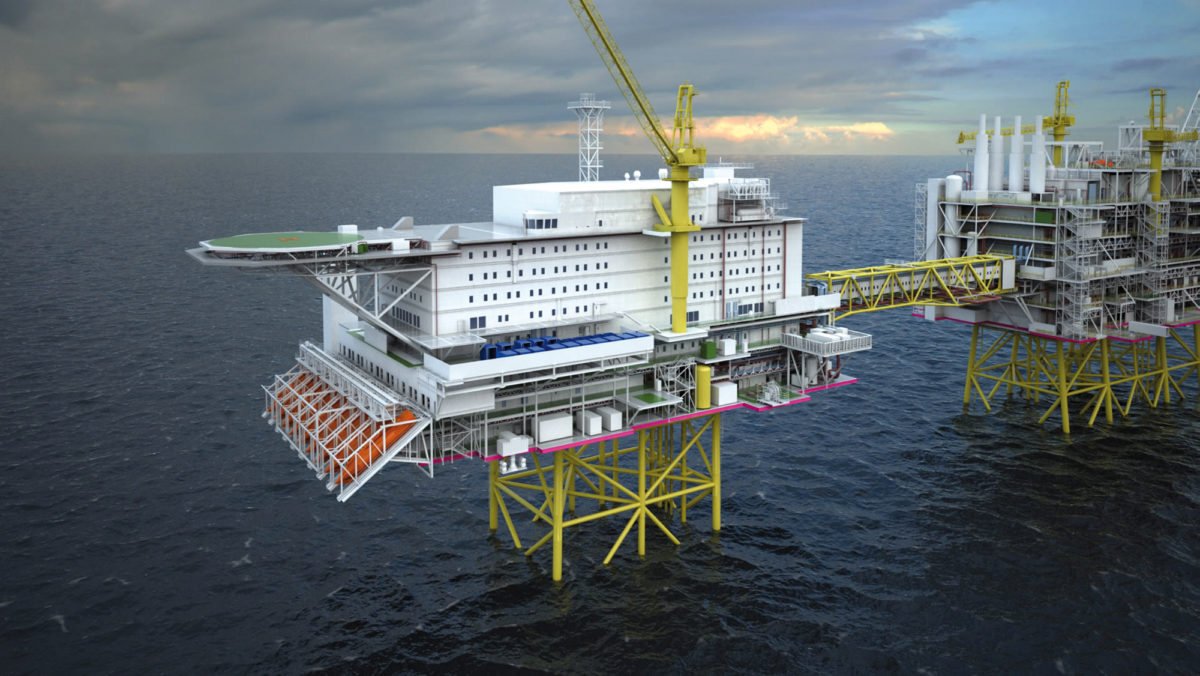 For the Johan Sverdrup project, PALFINGER MARINE is not only delivering state-of-the-art lifesaving equipment, but also seven fully electric offshore cranes. Click to find out more about the project and the cranes delivery and installation.

LIFTING THE NORTH SEA’S PETROLEUM by Sophie Grafinger 09.02.2018 Sales Director Jan Silgjerd is working on one of his most exciting projects yet. Here he shares what is, quite literally, in the pipeline.
Products
New cranes for Johan Sverdrup by Sophie Grafinger 08.02.2018 We invite you to accompany us to Aibel yard in Haugesund, where two of our cranes are installed on the drilling platform.
Products
WORLD RECORD LIFEBOAT BOARDING by Sophie Grafinger 08.01.2018 Full-scale boarding test of the world's largest lifeboat.
People