Through the eye of the needle

PALFINGER successfully mastered a major challenge true to our motto of creating value together: Moving a 200-ton crane 800 meters in one night.

800 meters doesn’t sound like a lot, does it? Placed in context of the recent European Championship, we are talking about the length of less than eight football pitches. Moving a 200-ton crane 800 meters in one night is, however, a major challenge. A challenge PALFINGER successfully mastered true to our motto of creating value together with customers and partners. We caught up with Field Service Engineer Szymon Otta to find out how much effort is involved in moving a crane of that size from an assembly plant to a nearby harbor.

The initial situation sounded simple enough on paper: a PALFINGER DKW 1600 wire luffing lattice boom crane produced for Aker-BP’s Valhall Oilfield needed to be transferred from a PALFINGER assembly site in Gdynia, Poland, to the nearby harbor and transferred to a floating barge for the trip to its destination. The distance to be covered was no more than 800 meters in an almost straight line. But this is where the “simple” part ends. Not only did the 200-ton crane have to make the trip in one night, but it also had to be – for want of a better expression – threaded through a needle eye created by a flyover. 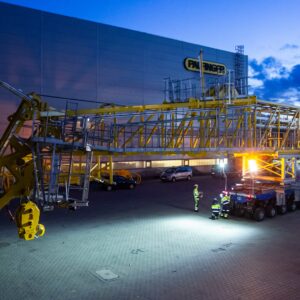 A PALFINGER DKW 1600 wire luffing lattice boom crane needed to be transferred from the PALFINGER assembly site in Gdynia, Poland, to the nearby harbor. 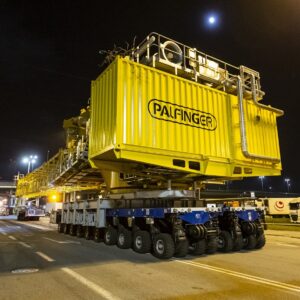 The distance to be covered was no more than 800 meters in an almost straight line. 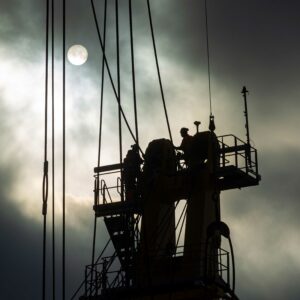 To avoid traffic obstruction, the crane transfer was carried out in the night. 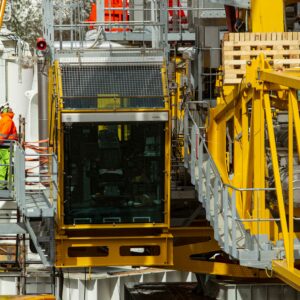 Moving a 200-ton crane was a major challenge PALFINGER successfully mastered true to our motto of creating value together.

Szymon Otta, PALFINGER Field Service Engineer on location, explains: “The first step of the process is to remove the whole crane from its test stand – a task expertly executed by mobile cranes – and place it on a specially designed transport frame.” This is where PALFINGER’s expertise in teamwork came into play. “The transport frame was moved by a self-propelled modular transporter (SPMT) with a maximum capacity of 1,600 tons, which was provided by the port’s technical service provider. The team that executed the crane transfer, which took roughly two weeks to plan, consisted of three PALFINGER employees, four SPMT operators, and four specialists from an external mechanical service provider,” Szymon reveals. A real team effort.

The first few hundred meters were a fairly straightforward affair, albeit it in the dark of night to avoid traffic obstruction. Asking the city authorities to remove a few road signs sounds complicated, but the convoy was about to encounter its major obstacle and biggest challenge: a massive overpass. “This is where things got a little tricky and utmost precision was essential,” Szymon explains. “Even though we laid down the A-frame, the gap between the crane and the structure shrunk to a mere 0.5 meters at times.” Luckily, the precious cargo was arranged in a way that allowed it to pass under the flyover without complications. The photos our team in Poland have provided show just how tight the spot really was. A heart in mouth moment if ever there was one. 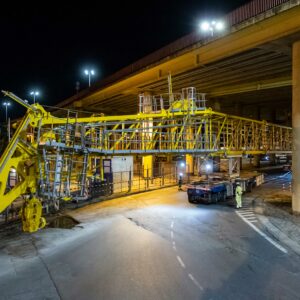 The precious cargo was arranged in a way that allowed it to pass under the flyover without complications.

The transport of the crane to the harbor went as smoothly as the previous ones did. 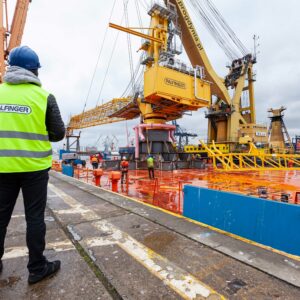 A massive floating crane, known by the name of “Maja”, transferred the cargo to a large transport barge featuring a tailor-made holding structure. 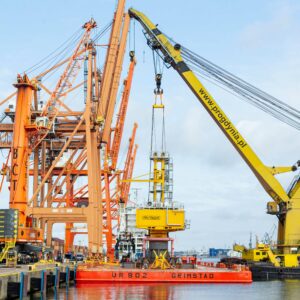 A massive floating crane, known by the name of “Maja”, transferred the cargo to a large transport barge featuring a tailor-made holding structure.

Clearing the flyover may have been the major challenge, but the trip was far from over. “The next step was to lay down the crane quayside at precisely the indicated location,” Szymon goes on. This is where the A-frame was re-erected before a massive floating crane, affectionately known by the name of “Maja”, transferred it to a large transport barge featuring a tailor-made holding structure. Surely, this is when the team breathed a sigh of relief? “We have executed seven similar transports for the Johan Sverdrup project in the past. I am proud to say that this transport went as smoothly as the others did,” Szymon smiles.

The crane transfer from the assembly site to the harbor was, as noted, handled by a rather small team, but the whole process of delivering the DKW 1600 crane to the Valhall Oil Field involved more than 30 dedicated experts from Aker-BP, PALFINGER’s marine business, the port authorities and further service providers. But where is the crane now? Szymon knows: “The crane is currently sitting in Egersund, Norway, for final testing and assembly. After these final steps have been concluded, it will be mounted on the oil rig in the Valhall Oil Field.” We would like to congratulate our employees, customers, and partners on yet another job well done.

Watch the full video of the crane transfer here:

2 comments on “Through the eye of the needle”

‏ozark ending
I loved your blog article.Really looking forward to read more. Much obliged.
Reply
Dee Axel
Your style is very unique in comparison to other people I've read stuff from. Thank you for posting when you've got the opportunity, Guess I will just book mark this site.
Reply

New cranes for Johan Sverdrup by Sophie Grafinger 08.02.2018 We invite you to accompany us to Aibel yard in Haugesund, where two of our cranes are installed on the drilling platform.
Products
LIFTING THE NORTH SEA’S PETROLEUM by Sophie Grafinger 09.02.2018 Sales Director Jan Silgjerd is working on one of his most exciting projects yet. Here he shares what is, quite literally, in the pipeline.
Products